Halloween is fast approaching, and /777/ is now 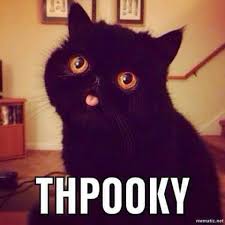 We are only going to say this once, so pay attention.
We realize that you guys are going to be edgy edgelords, and post things that fit into that mindset. That's fine, you're entitled to say stupid shit on the Internet.
However, if you post any threats of violence, be they to an individual, a group, a race, a religion, or anything that could be construed as such, you will lose site privileges permanently.
If you post something (or do something) stupid enough that it generates law enforcement activity, we will cooperate fully with the investigation.
It's OK to vent. It's OK to yell stupid conspiracy theories or strut around in your brand new Chinese-manufactured Nazi uniform. Nobody has to pay attention to you. However, advocating, threatening, or committing violence crosses a line, and we aren't going to tolerate it. This "irony" shit has been going on for far too long, long enough that stupid people are taking it seriously, and it puts us in a spot where we have to put our foot down.


We are working on a completely recoded thread reader (read.php). The new version will have support for modern RESTful routing AND JSON/YAML API for all endpoints. We may end up switching to it entirely, since it is far more performant than the old .html page generator.
While we're putting it through its paces, you may notice bugs here and there while we make changes to old code. Please yell at N3X15 in IRC or Discord if you notice a bug.

WASHINGTON DC: You have probably heard of a new drug sweeping cyberspace by storm. It goes by many names: Fart. Spunk. Auto-erotic Asphyxia. But what is Discord, and what does it mean for 7chan?

Dick Hardcheese, a scientician for the Center for Communication Control, tells us that Discord is a trendy new communications platform that all the hip kids are using, after Mumble finally caught fire and sunk into the swamp.

"It's like all the worst parts of IRC, Ventrilo, and Steam." He explains, snorting a line of coke off a hooker's left tit. "All wrapped up in a fancy Electron interface that the kids eat up like fucking candy."

"It won't even let you run a dedicated server!" Beams a random child in the lobby of Fortnite, the summer's hottest crate simulator. "And they're always offline! Everything I ever wanted to talk to friends or organize games!"

In response to several morons trying to start their own 7chan servers and - unsurprisingly - spam the link on the site, the site administration is providing a judgement free zone where addicts can get their fix of Discord without being tenderly loved to death by the staff.

The site administrators also ask that people stop fucking linking to Discords in lieu of posting content, reminding members that such activity is how chans die.

Remember oh so many years ago when you were young? You had your whole life ahead of you. You were having so much fun joining raids on /i/, and telling the newest batch of silly sausages to "lurk moar." Well now the years have passed by faster and faster, and you've still not accomplished anything with your sad life. At least you'll always have all those dank memes to give you a chuckle. For a short time /777/ is ready for you to revisit your moldy old memes, so dig out your old /b/ folder, and post the best, the worst, and the forgotten memes. Oh yeah, best meme wins 3 whole internets!

All you damn miners making it impossible for me to get a new video card for a reasonable price are causing me to rage! Oh, and by the way, there's a new /777/, cryptocurrency, for all your crypto related conversation needs. Now let's try to get back to panic selling!